Across close to 200 acres of farmland in tropical Far North Queensland, a dedicated farming family is establishing a secure future in the industry – one organic banana at a time.

The Abbott family operate two farms, one at Mena Creek and the other at Wangan, both near Innisfail, growing certified organic bananas.

Brothers Ben and Matt are at the helm of the banana business, but parents Rob and Jenny have close to 30 years experience meeting the expectations of the niche, but in-demand, organic banana market.

Matt said the brothers had grown up with bananas in the family.

“I really enjoy what I do on the farm and that’s probably come from growing up on the farm with Dad and watching what he does,” he said.

“When you grow up with it it’s engrained into you. It’s pretty special to be able to do it with family.”

Innisfail’s climate is the envy of primary producers across the state, not a single month has a mean temperature of below 18c or with less than 60mm rainfall, but the notoriously damaging tropical cyclone season runs from November to April.

The second property is 25km away from the existing family farm - enough to mitigate biosecurity risks as well as lessen the potential for cyclone damage.

They also plant and stage their cropping cycle to mitigate the effects of cyclone season.

Organic certification provides their fruit with a consumer advantage in the marketplace along with an increasing demand for the product.

“We farm about 180 acres or organic bananas on two separate properties, the home farm with Dad and the property we purchased with the QRIDA First Start Loan,” Ben said.

“The time was right, we applied for the First Start Loan to purchase an existing banana farm to expand.”

Matt said the decision to access a First Start Loan was about expanding the business but also following a succession plan to allow the brothers to run their own banana operation. 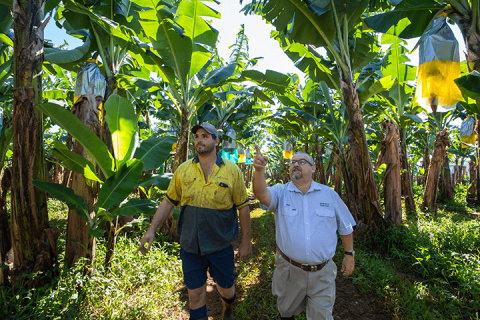 "As much as the decision was about expanding and growing, it was about a bit of succession planning and setting the business up so we could do it together,” he said.

QRIDA’s ‘very competitive’ interest rates encouraged the Abbott brothers to consider a First Start Loan when they were purchasing their farm.

“It allowed our business to grow, purchasing a new farm was part of our succession planning so the First Start Loan allowed us to do that,” Matt said.

Matt said the family was able to gain valuable insight from QRIDA to help them through the application process.

“When we were looking at buying the farm, the initial thought was we had to borrow from the bank. When we started talking the Regional Area Manager everything seemed a lot simpler and easier so we continued down that path to where we are now,” he said.

“When we were going through the application process, they stepped us through it the whole way, so it was pretty straight forward.

“It should be your first stop to talk to the guys at QRIDA and see if that process is going to work for you.

“Dealing with QRIDA has been easy. The local representative has been very helpful and professional in our dealings.”

“The majority of Australian-grown bananas are produced in Far North Queensland so this area has a rich legacy of high quality, fresh tropical fruit,” he said.

“QRIDA is able to support all kinds of primary production enterprises and we encourage producers not to self-assess but get into contact with us to see how QRIDA might be able to help your farming goals progress.”

Mr Spina said he was available in the local area to meet with producers and answer their questions about eligibility or the application process.

“Initially I sat down with Ben and Matthew to go through our processes and what they needed to get together. Then I helped them along the way to make sure their application was completed correctly, their business plan was completed along with the cash flow forecasts,” he said.

“People can contact me via Freecall 1800 623 946 and I am also available to meet with them on-farm.” Mr Spina concluded.