Silver and Jade Perch are trucked from Pond Perch Farming in Childers to Sydney every week; where they end up in tanks in the nation’s most up-market restaurants, in-demand seafood suppliers and even swimming about in traditional Asian corner stores.

Steven chauffeurs two tonnes of fish himself, to make sure they arrive live, in the best possible condition and meet the standard demanded from their customers.

The couple have tens of thousands of mouths to feed every day, prying birds to scare and thousands of kilometres between them and their customers but at the forefront of their operations is their drive to produce the best possible product.

Along the way they are faced with bird predation, electricity and feed costs and water security challenges but every fish that leave the Volz’s tanks is the best possible product they can offer.

Steven and Lisa used a QRIDA Sustainability Loan to install a 30kw solar panel system to offset more than $20,000 from their annual power bill – money better spent on fish food.

The Volz’s say Australia’s undersupply of domestic live freshwater fish is thanks to an ever-growing Asian population whose cooking techniques demand a particular product.

They’re working to meet a constantly growing demand for live fish; produce customers can hand pick from the tanks themselves and cook to their liking.

“There is a greater population of Asians in Australia and it is a product they enjoy,” Lisa said.

“They like live produce and it compliments Asian cooking styles. It’s something that part of the world really appreciates. They love this style of fish and love to see the live product.” 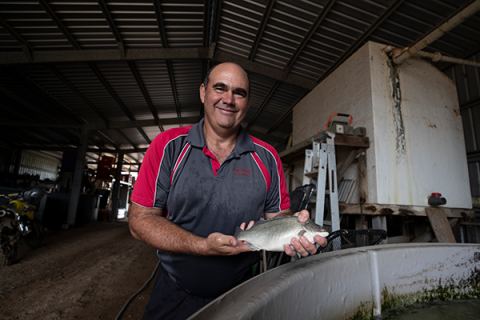 Aquaculture demands an investment in time, expertise and resources for 18 months to grow a Perch from pond to plate.

Perch fingerlings are about 5mm long when the Volzs buy 80,000 every year and nurture them until they’re big enough to eat; about 700 grams. They supply on average 38 tonnes of fish a year.

Steven said every fish needed to be in the best possible condition when it arrived at market.

“We aim to have the best product we can and the better it looks, the more the customer will like it. It needs to be presented well, without dented fins or looking haggard, without a damaged tail or sores all over it. We want the product to look healthy,” he said.

“We have done a lot of work on the transport methods to do that to the best of our ability. The fish end up in tanks and are sold live so if the fish have missing scales and sores, it’s not a product people want to buy.”

It’s a process worthy of the outcome, Steven says.

“There is a great reward to seeing fish bought to market after growing them for 12 to 18 months which is how long it takes them to get to plate size,” he said.

The fish chew through 500kgs of specialised fish food every three days; to the tune of $100,000 a year. Add to that a constant battle with Cormorants, a bird with a particular taste for seafood, and the process to raise a fish becomes one of dedication, passion and grit.

“Cormorants really like fish, if 50 of them land, they just keep eating and we have major losses,” Lisa said.

“We started using cages to grow to fish because bird predation has a major impact.”

Fish were not always the Volz’s calling. Steven is a diesel mechanic by trade and, in search of a new challenge, the family, together with their thee teenage children, swapped mining in Central Queensland for their aquaculture farm in 2011.

“We wanted to do something by ourselves, not be working for a company all our life,” Lisa said.

“We needed a new challenge and to give the kids a different opportunity; to be closer to a bigger centre with more opportunity.”

The property needed attention and the 15 already-established ponds some work but together, Steven and Lisa were able to make a life of their new challenge.

“For the first 12 months we were playing catch up to keep going forward. We’ve made a lot of changes,” Lisa said.

“Steven enjoys the pioneering part, if there is a problem he will work it out, he’s very good at thinking outside the box. Whereas I’m into the background work of the business.

“Steven is pretty creative in designing things, like feed systems and cages whereas I am better at all the little bits in pieces in the background. I’m more likely to be monitoring the water quality or checking the oxygen levels.”

The couple used at QRIDA Sustainability Loan to buy a 30kw solar panel system which has helped reduce their power bills by more than $20,000 a year.

QRIDA Wide Bay and Burnett Regional Area Manager Mark Barrett was able to visit the property and help Steven and Lisa through the application process.

“We have been able to reduce our power bills by about 30% and it would be nice to get more,” Lisa said.

“Mark Barrett was excellent to work with and helped us through all the paper work for the application.

“The lower interest rate is a huge bonus and we needed to jump through some hoops but it’s worth the reward.”

Sustainability Loans of up to $1.3 million are available to help in achieving a more productive and sustainable primary production enterprise.