Beyond the homestead fence on Billy Carson’s sheep and cotton property, the reality of the drought crippling South West Queensland hits hard.

Like many producers battling the conditions across the region, a blanket of lush green grass surrounding the family home is the ideal place for his children to play and a welcome relief from 15,000 acres of dirt immediately beyond the fence.

The drought situation at Hooloovale, near Dirranbandi, is not unlike Billy’s two other properties, Ooraine and Somerset, together totalling 45,000 acres, and not unlike the rest of South West Queensland.

The drought has forced him and his family to make some tough decisions about the future of his family’s farming empire, which his parents started in the 70s, and consider how best to make the sheep pay for themselves.

An independent review through the Farm Business Analysis Assistance program validated what they are already doing.

The program, delivered as part of the Queensland Rural and Industry Development Authority’s Farm Debt Restructure Office, aims to get producers and financiers back around the table to tackle farm debt head-on.

For Billy, the Farm Business Analysis Assistance report validated he was already doing all he could to support the family business, given the conditions.

“It gave us confidence in what we were doing, we were going in the right direction,” he said.

“The report said given the season there was nothing we were doing wrong. They suggested some different crop rotations and lease options which we’re always open to.

“I think that’s important because sometimes people can get tunnel vision, they’ve done it for 60 years and they think that’s the right way. You need to be open to change and especially in these current conditions, you need to be able to adapt to change. If you only learn one thing from a suggestion, then there is no loss.”

Billy said the report came at the right time.

By January 2020, more than 9,000 mega litres of dam storage was dry and Billy had been feeding his stock for more than three years. The region, 700km west of Brisbane and 100km from the New South Wales border, was among the worst drought impacted in the state.

“Previously our longest period of continued feeding was nine months and this one has been three years, so it has really started to take its toll,” he said.

“We’ve got to make some pretty tough decisions soon because the sheep are now starting to cost us to feed them. We need to work on the numbers so they pay for themselves.

“Before we could manage that because we would get a break but this has gone on for so long. At some point you’ve got to draw the line.

“That’s been the biggest challenge, the lack of rain. We haven’t had a run in the river now for a couple of years.”

Billy’s bank manager referred him to the Farm Business Analysis Assistance program, a no-obligation, free service which uses a panel of farm debt restructuring experts with significant experience in investigation and guidance for producers in financial difficulty.

“The specialist came out to the property and took the time, they dove into every little aspect,” he said.

“It made me more confident to be able to see the report before anyone else. We were very happy with the support and the transparency, what we saw is what we got.”

The independent report gave Billy the peace of mind he was already tracking well for when conditions changed.

“It made the bank a lot more comfortable, it’s always good to have an external opinion. To have the report saying we are doing the right thing but the stuff from the sky hasn’t fallen, that gives you a lot more weight when asking for more assistance,” Billy said.

“I was interested in an external opinion, someone else’s view. To have someone else out of the equation have a look, firmed up the fact what we’re doing is on the right track, rather than doing it because that’s the way it’s been done for the last 50 years.”

Billy said the process came with plenty of support, which meant he could get on with running the business while the report was being prepared.

“I think it’s an excellent thing to do for your business. It looks into your business, how you do things. It’s external so there is no vested interest, there is no pressure from the bank and it’s up to you if you want to send it to your bank,” he said.

“This gives you something to discuss with your bank, to show them you are actively trying to improve your business which is all the bank wants you to do. Often enough they are just another partner in your operation, you can’t treat the bank as this big scary thing, because at the end of the day they want you to succeed.”

“It was another tool that didn’t cost you anything.” 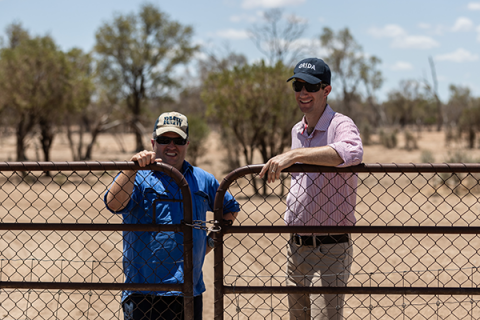 Queensland farmers in the grip of financial difficulties have access to a no cost, independent review of their business to help them answer some of the difficult questions.

The aim is to get producers and financers back around the table to tackle farm debt head-on. The unique and free service uses a panel of independent farm debt restructuring experts with significant experience in turning around struggling farming enterprises.

They provide an impartial report on the farmer’s business, operation and overall financial position. They work with the farmer in identifying financial problems, rethink strategies and come up with options and recommendations resolving underlying debt issues including debt restructure.

“Debt restructuring is more about trying to find a viable operating model for a primary producer, define what that looks like and developing a plan for the producer and their professional network such as their bank and accountant to act upon.”

The key benefits of the program are the farmer chooses who they wish from the panel and who will engage on farm. The program covers the costs of the service with the farmer having a say on who else should be consulted, along with actively participating in the consultation process. The Farm Business Analysis Assistance program uses independent financial specialists, providing options to protect the wealth of an individual or family enterprise.

“We’ve already seen applications from beef, sugar cane and horticulture producers with debt exposures ranging from as low as $300,000 up to $15 million,” Mr Elder said.

“I have seen evidence the program works. It gives me confidence an independent specialist assisting farmers in financial difficulty, although possibly daunting at first, is making a difference to their longer-term viability.