Farming families in a disaster zone: What it takes to keep a cattle dream alive

As unprecedented weather overwhelmed their families’ North West grazing property, Robert and Ruth Chaplain could do little but ‘take heart’ they could do nothing to reduce the imminent devastation.

Across the disaster area, thousands of head of cattle fell victim to plummeting cold temperatures following weeks of scorching heat, treacherous conditions, flooding and a lack of feed, forcing rural communities to act quickly to save their businesses.

Within six months of the disaster, more than $80m in Special Disaster Assistance Recovery Grants had been paid to primary producers across 12 local government areas, helping producers pay some of the bills for cleaning up and getting back to business.

Robert and Ruth Chaplain’s family property at Maxwelton was in the thick of the disaster and the couple were among the first primary producers to access the funding after the flooding, using the money to dispose of dead livestock and start the long road to recovery.

It took two weeks before the Chaplains were able to access their property and assess the damage.

Robert was travelling for work at the time and Ruth was home with two small children; Sidney, five, Mary, three, and baby Walter was born eight weeks after the disaster.

Robert said there was nothing they could have done to reduce the impact.

“Most of that week we weren’t sure what was going on. The initial thoughts once I knew when I took the chopper ride down and we had a lost such a large percentage of our herd, our minds went into what can we do to get back onto our feet,” he said.

“I don’t think I could have been prepared for it. We had a plan in place before the event, we were about to start selling down. We had made the decision to put cattle on the market because of the shortage on feed. We had our plans in place and our feed budgets leading into it were comfortable with the cattle we had.

“When the rain started we thought this is awesome, you beauty, we were right to go. We could not have prepared. This was unprecedented, there was nothing we could do better. Around about day five we started to get a bit concerned.”

Ruth said they had to assess the damage before they could make a plan for recovery.

“As soon as Robert got back we started to hear about losses and we wanted to get a chopper down as quickly as possible,” she said.

Robert counted the dead cattle from a chopper a week after the flooding.

“A mate was the first person to get in and he drove 100kms from Julia Creek in a buggy,” he said.

“The roads were all busted and we couldn’t access the property for two weeks.

“We started fencing as soon as we could access the property.

“My mindset was changing the whole time but we knew we had the rain and the grass was going to come so we knew we had to get the fences up. The government were still coming up with plans through that time so we focused on what we could do.”

He said, like other graziers, their herd was impacted due to exposure to the elements.

“It wasn’t the flooding that impacted them, but the exposure. They weren’t in water, they were in mud and sludge in the cold winds. They couldn’t move or get dry,” he said.

Robert said they worked to rebuild fences ready for restocking.

“I knew the reality of what had happened to us but I tried to stay positive. We couldn’t change that so we focused on what we could do going forward, getting in and fixing fences so we were prepared,” he said.

“We had a plan and showed we could get through this with QRIDA’s help.” 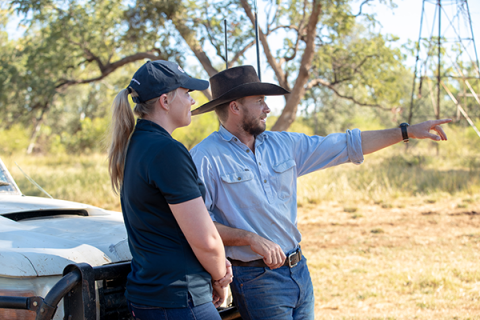 The Chaplains already had contact with QRIDA, having previously accessed a First Start Loan to buy cattle, and wasted no time contacting their local Regional Area Manager to discuss recovery options.

“We had a conversation about giving the Regional Area Manager a call and letting her know what happened without fully knowing what we had lost. We knew we weren’t the only ones,” Ruth said.

“It was pretty quick, they said the last thing to worry about was the QRIDA loan. I remember her saying, ‘you have a lot of other things to worry about and focus on those. QRIDA will support you’.

“Since we have developed that relationship with QRIDA, they know our business and they knew us personally. We were at a point where I was 38 weeks pregnant, we had lost a lot of our herd and it was just really good to talk to someone who knew us. We were freaking out.

“The benefit of QRIDA is you can have that relationship, but they are looking at the personal aspect too and in this instance for us, that helped. It wasn’t new, we knew the process better.”

Ruth said they could access grant funds within a few days of the application submission.

“It helped they knew our situation and we had been through QRIDA before. They had all our financials so we could go through that process a lot quicker. For them it was easier to assess us because we had that relationship already,” she said.

“It was a weight off my mind.”

Robert said many of the cattle lost were purchased using the QRIDA First Start Loan.

“Prior to the rain coming, we were in a pretty good position, even though it was dry. Even if we had to sell down we were in a good position but when you lose a large percentage of your breeder herd, where do we go from there, back to the mines and slogging away,” he said.

“That’s where the loan came in.”

Robert said it was hard to predict when their business would fully recover financially, with changing markets and the loss of their progeny.

“We’re definitely still looking for a property of our own. We will work with QRIDA in a couple of years time,” he said.

“We know QRIDA is there to support us and we have options in the future.”

Ruth said the business plan before the disaster happened included the potential for property purchase of their own.

“Before this happened it was a reality, we were doing really well. We had to move on from that thought quite quickly. It was very hard not to think about being set back a long time. We are over that now,” she said.

“We took a pretty positive approach initially and tried to follow that through. There is light at the end of the tunnel.”

Stock is grazing, grass is growing and fences are repaired across much of North and Far North Queensland following devastating flooding in February.

Tens of millions of dollars in recovery grants from Queensland Rural and Industry Development Authority have been spent on immediate clean-up activities, while Disaster Assistance Loans of up to $1 million have helped farmers re-stock and replaced damaged infrastructure.

Eligible graziers can also access North Queensland Restocking, Replanting and On-Farm Infrastructure co-contribution grants of up to $400,000 to help speed up the recovery process.

Cloncurry graziers Robert and Ruth Chaplain used a Special Disaster Assistance Recovery Grant as well as a Disaster Recovery Loan to purchase heifers and restore their business but have plans to use the co-contribution grant to re-stock further.

Robert said he encouraged eligible primary producers to apply for assistance from QRIDA.

“You’d be crazy not to take advantage of it, it’s a too good of an opportunity. There is a fair bit of help out there for those who are doing it hard. QRIDA is putting a lot of troops on the ground to help the process which is great and there hasn’t been something like this before. It’s definitely going to help rebuilding,” he said.

Ruth said the farming community was working hard to re-establish the industry in the months following the disaster.

“There has been some grass, and the cattle that are alive are doing well so far” she said.

“There has been a heap of community support, government support and it’s ongoing, it’s not disappeared.

“It’s nice to get back to mustering and back to business. That’s what agriculture is about. You love it so you want to get back to what you love doing.”

The North Queensland Restocking, Replanting & On-farm Infrastructure Grants are funded by the Australian Government and administered by QRIDA.