Passion for beef and drive to succeed makes for strong start

With beef in the blood and the determination to succeed, Central Queensland graziers Garrett and Kate Kirk have put in the hard work to achieve their dream of owning and managing their own beef enterprise.

Based in Dingo, with country also in Gogango and Bluff, the Kirks run approximately 1500 breeders across their properties where they focus on getting the genetics right to ensure their cattle are fertile, tropically adapted and high yielding, producing high quality beef.

Growing up on a property at Gogango on the Fitzroy River, Garrett always knew he wanted to run his own beef operation, Watermark Pastoral Co., in the Central Queensland region. After finishing school he studied at the Emerald Agricultural College before working for local cropping families and then returning to manage some of his parent’s properties.

After meeting Kate, who enjoyed a rural upbringing in Northern New South Wales where she developed a love of horses, Garrett put plans in place to start their cattle trading and breeding enterprise.

“When starting out, our main motivators were that we wanted to be self-sustainable and able to work for ourselves,” said Garrett.

Being able to bring up their young family on the land and involve their children in their beef operation was also a high priority for the Kirks.

“Part of the reason we do what we do is to be able to offer our kids the lifestyle that it does provide. Our children are only young but they are very much part of the business and that’s one of the best things about the business we’re in, that we can work together as a family,” said Kate.

With dreams of owning their own land and cattle, the Kirks started off agisting cattle and leasing land at Bluff while building up their cattle numbers to have enough equity to purchase their own property. In 2013, when land at Gogango across the river from Garrett’s parents’ place became available, Garrett and Kate knew it was the right time to purchase.

“It was quite daunting when we were considering starting our own business. The biggest hurdle was getting the deposit and asset base together which we could borrow against,” said Kate.

Luckily, the Kirks knew the Queensland Rural and Industry Development Authority (QRIDA) had low interest loans available for young producers like themselves to purchase their first property.

“Thankfully, QRIDA’s First Start Loan was accessible to us and that really gave us the starting platform to launch into our own breeding enterprise where Garrett could stop working for wages and just focus on our own business and exactly where we wanted to go,” said Kate.

Soon after purchasing their fattening block at Gogango the value of their land increased, allowing them to borrow additional funds under their First Start Loan to buy cattle.

“Our goal is to have a few thousand breeders so fertile cattle are integral in doing that,” said Garrett.

“Those extra cattle allowed us to bring our business up to a sustainable level where we were self-supporting, could service all our debts and could really start looking towards the next step and where we were going to go next,” added Kate.

“Garrett and I have always been fairly driven and had a clear picture of where we want to get to. We just needed to get over those first couple of hurdles back at the start of our career which is where QRIDA was instrumental in helping us – then we were really able to flourish and go ahead in leaps and bounds.” 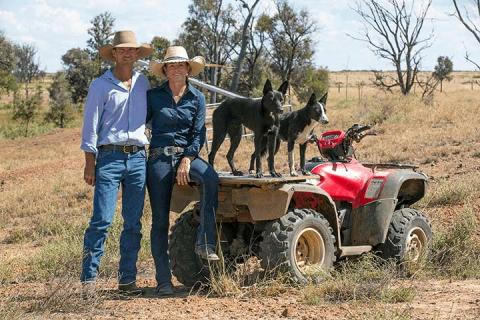 After many years of hard work and two young children in tow, Garrett and Kate are now in the position to think more about expanding their business, increasing their land holdings and focusing on infrastructure developments to improve the productivity and profitability of their operations.

“There’s a lot of infrastructure work that needs to happen, like getting clean water to more parts of the property, fencing off soil types and creeks and getting the genetic base of our herd up to the top end of the type of cattle that suit Central Queensland,” said Garrett.

The Kirks are grateful for the opportunities they have received as a result of their QRIDA loan and encourage other young producers in their position to take the initiative to look into what a First Start Loan could offer them.

“QRIDA was instrumental in giving us our first start, allowing us to buy a small block in the first instance, build up our cattle numbers and start slowly. They’ve been great to deal with and have certainly set us on the right path and given us good support,” said Kate.

“You don’t have to go out and buy a thousand acres as your first place. There’s lots of opportunities, you just have to be open to them and look around for them to get that first start.”

Having local support from QRIDA in the way of their Regional Area Manager based in Rockhampton helped the Kirks through the application process and gave them the confidence that their application was prepared correctly.

“We enjoy face to face interaction with people so it was quite comforting to have somebody we could go and see. Just knowing he was based in Rockhampton, not somebody in the city that wasn’t as familiar with our operation and what we were talking about, gave us the confidence that he was on the same page as us and really wanted us to succeed,” said Kate.

First Start Loans provide up to $2 million to cover capital costs to assist producers make a start in primary production. With low interest rates, up to 20 year repayment terms and no fees or charges, the loans are an attractive option for young producers to start realising their farming future.

To learn more about how this loan could help your primary production enterprise, visit QRIDA First Start Loans.